The pie charts illustrate the proportion of various reasons why some people in Britain opted to stay in UK whereas others chose to leave in a certain year. Overall, the biggest reason for Englishmen leaving or staying in UK is the same, namely to join families or friends. In terms of why people chose to leave UK, the reasons are classified into 5 categories as follows: to join family or friends, weather, employment, financial and other reasons. Joining families or friends, which accounted for 39%, are the number one reason why Englishmen chose to leave UK, and next is weather, with 24 % of people leaving UK for this reason, followed by employment, at 18%, and finally come financial and other reasons at 10%, 9%, respectively. Interestingly, to join families or friends, which constituted 34%, was the biggest reason why people decided to stay in UK as well. And 30 % of people in Britain decided to stay in UK for languages. The remaining reasons why Englishmen chose to continue to reside in UK are, by and large, evenly distributed among employment, financial and other reasons, at 13%, 12% and 11%, respectively. 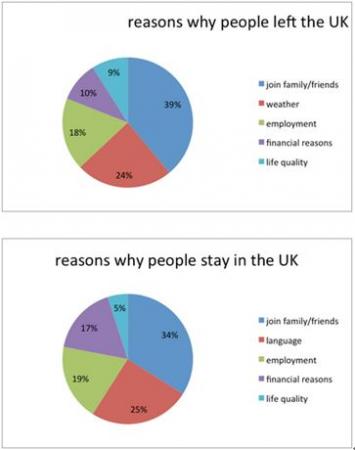 The pie chart shows below show reasons why people left the UK to other countries and why people stayed in the UK.